are we too rational about our perceptions of climate science?

Dan Kahan writes in this week's Nature that we are so polarized in our interpretations of climate science because "If anything, social science suggests that citizens are culturally polarized because they are, in fact, too rational — at filtering out information that would drive a wedge between themselves and their peers.".  He goes on to describe how we need better, less polarizing, science communication.

Posted by Daniel T. Blumstein at 10:01 PM No comments:

There's a great piece in the NY Times today by Eric Klinenberg about how our summer's heat is changing American's perceptions of climate change.

"For now, though, Americans, long cynical about global warming, are confronting the facts. According to a survey conducted in July by the University of Texas, 70 percent of Americans believe the climate is changing, compared to 65 percent in March, and only 15 percent say it isn’t. Party affiliation continues to divide public opinion, but today most Republicans, 53 percent, believe in climate change, as do 72 percent of independents and 87 percent of Democrats."


The question for tonight's dinner is:  Now that more folks are accepting that the Earth is getting warmer, what will it take for people to welcome the change that's needed to do something about it?
Posted by Daniel T. Blumstein at 6:43 AM No comments:

The Hidden Cost of Hamburgers

Great video that talks about the hidden ecological costs of eating hamburgers.
Posted by Daniel T. Blumstein at 5:45 PM No comments:

Here's my new Huffington Post Blog entry about marmots and plastics and something I've been losing sleep over recently.

The Old Maid is a small, permanent snowfield on Gothic Mountain, across from our cabin in Gothic, Colorado.  It looks like a witch on a broomstick (as can be seen in the center of this photo taken in May 2012 by Adrianna Maldonado). 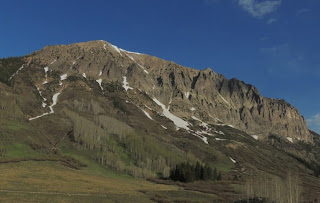 This year the Old Maid essentially melted out.  I say essentially because I am leaving the Rocky Mountain Biological Laboratory soon and the entire bottom is melted out (I've never seen this before) and the head is shrinking rapidly.

The Old Maid has melted out in the past, but only rarely, and typically in September or even October; before the snows resume. This year, by July, it was in poor shape.

Climate change is changing alpine landscapes. Glacier National Park will likely soon have no more glaciers. Lower elevation alpine meadows will be a thing of the past, and The Old Maid may become an early summer memory.

At a lab party in Richards Cabin the other week, some brilliant graduate students came up with a delicious recipe for a drink to celebrate the Old Maid. It capitalizes on an introduced plant--rhubarb--and combines a rhubarb simple syrup with bourbon and lemon juice. Served over ice (from the Old Maid?), it's a refreshing way to ponder a sad event: the loss of glaciers.

Thanks to Paul CaraDonna, Ross Brennan & Parris Humphrey for being so inventive!

At a rate of one Colorado Miner's Inch* combine:

0.08 seconds of Good Bourbon,
0.04 seconds of Rhubarb Simple Syrup**,
and then
the juice of one half lemon
ice from the Old Maid of Gothic Mountain (if available, check current climate change predictions).

Mix thoroughly and serve over more ice or snow.

*Note: A Colorado Miner's Inch is equivalent to 1ft3/38 seconds (not to be confused with a California Miner's Inch or a Nevada Miner's Inch). (note from Dan:  where did they guys come up with this unit?)

**Richards' Rhubarb Simple Syrup: Add equal parts water and sugar (e.g., two cups water, two cups sugar) to a pot.  Heat until sugar is in solution. Next, add as much chopped rhubarb as one can fit in the pot, bring to boil, reduce heat and simmer the whole mess for 10-15 minutes.  Strain and remove the rhubarb stem pieces and put the lovely pink syrup in a jar and you are good to go!  (Do not discard the rhubarb stems…they are perfectly used for rhubarb crisp, pie, or whatever else you might want to use rhubarb for).

Enjoy.
Posted by Daniel T. Blumstein at 1:43 PM No comments:

Daniel T. Blumstein is a Professor and in the Department of Ecology and Evolutionary Biology at the University of California Los Angeles, and is a Professor in the UCLA Institute of the Environment and Sustainability. In addition to over 300 scholarly publications, he has written or edited six previous books. Learn more about Dan's interests and research at his UCLA website.

Some sustainable recipes from the book...

Warm figs with basil and cayenne

Salmon on a bed of asparagus fried rice

Some discussion topics from the book...

Eat low on the food chain

Eat organic if you can

Should taxes be used to motivate behavior?

Is our food too cheap?

Auto use and oil dependency

Is there such thing as sustainability?

You might also like to read The Failure of Environmental Education (And How We Can Fix It). Read more about it, including a sample chapter, at the University of California website, and click on the book to buy it at Amazon.